WW1 History at Cannock Chase: Tackeroo – The Sound of Silence

Cannock Chase is a mixed area of countryside in the county of Staffordshire, England. The area has been designated as the Cannock Chase Area of Outstanding Natural Beauty. It is also very proud of its long association with the military.

At the Marquis Drive visitor area (Hednesford, Near Cannock, WS12 4PW) an original wooden war hut has been faithfully reconstructed and is now used as a base for educational talks and visits about this military life. The area has the feel of a large municipal park now, with a cafe, children’s playground and plenty of leafy, open spaces. But this vast site was once home to a huge WW2 air force base, where thousands of pilots were trained for service.

Only a mile or so away lies the peaceful Tackeroo Camp Site, a stress relieving elixir of tall pine trees, mud, grass, birdsong, bees and butterflies. Watching the sleepy, sinking sun It’s hard to imagine this space ever being less than tranquil.

Today, cyclists whiz through, people pitch tents and park caravans or camper vans. From foraged sticks and broken branches, camp fires are lit at dusk. A sense of communing with nature and wildlife abounds. Upon leaving, everything is respectfully left as it was before except for the burnt-out cinders of a fire or two. The environment looks for all the world to be one of nature’s reclaimed spaces. Everything is as it was intended to be: indigenous trees, birds, insects, squirrels, wild flowers, grass, moss and herds of deer too.

But interspersed with this wildlife are several large concrete pads. These patches of concrete, of various sizes, shapes and states of repair are telling. Oddly, they don’t seem to detract from the environment at all. On the contrary, they suit our 21st century purpose very well, offering useful hard-standing for touring caravans and camper vans and also somewhere to park the car. Children run, skip and cycle on these surfaces. No-one seems to question their original purpose, or how long they’ve been there for. They now have a new lease of life – a second wind. Nature is doing its very best to reclaim this ground and grass is slowly creeping through the cracks that age, wear and neglect have caused. The once-hard edges are now softened by a creeping carpet of green.

But exactly a century ago these concrete patches provided the flooring, footings and foundations for myriad wooden military buildings, the roofs and walls of which have long-since gone. They tell a tale of a Tackeroo history far removed from its current soothing state. The site formed part of a huge, bustling training ground for First World War Soldiers.

In the autumn of 1914, work began on the construction of two huge military camps at Cannock Chase. The Earl of Lichfield had given permission for this part of his land to be transformed into one of the camps eventually to be known as ‘Rugeley Camp’. The sister camp, – to be given the name ‘Brocton Camp’ – was also constructed nearby. There being no existing amenities on either site, everything had to be constructed from scratch..including the water supply, sewage systems and the roads…before work could begin on the huts and other structures.

The construction of the Rugeley Camp, including the Tackeroo area and its immediate surroundings, was completed in less than a year. Water supplies and sewage disposal pipes were installed, roads and rails were laid down, barracks and shower blocks all built. As the site would go on to train and accommodate 20,000 soldiers, at any one time, the infrastructure demands were immense. The camp site paths – now used by cyclists and walkers – were once railway lines. These railways brought in artillery munitions to be housed in a huge purpose-built storage building in what now is the centre of the camp site. 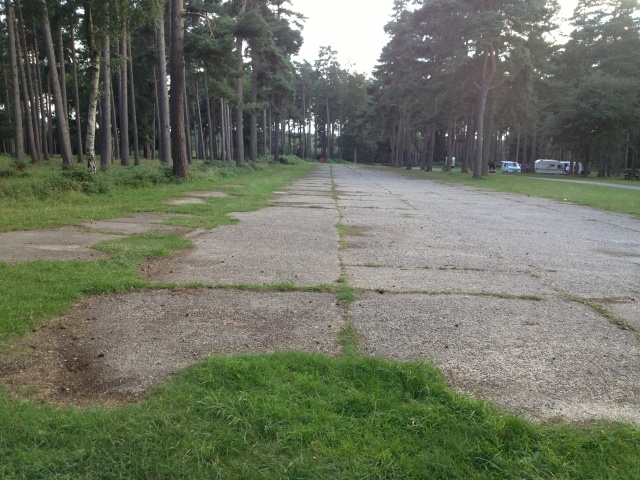 The concrete foundations of the main munitions storage shed can still be found in the centre of the camp site.This covers a large area and certainly would have provided plenty of storage space. Today it is quite something to walk on the huge concrete slab which was once the floor of this munitions hut and contemplate in the mind’s eye the vast stash of ammunition and tools of warfare that must have been stored there.

I have tried to muster a hazy, incomplete, mental picture of rows of shelves weighed down with bullets, bombs and guns – the tools of war. On the eastern side of the campsite, the concrete foundations of several shower blocks still remain to be seen. Indeed the drainage channels and holes are still clearly visible, if one takes the time to look. The visible minor roads which once ran between the storage sheds in the area are in daily use, as tracks on the site.

On the southern edge of Tackeroo site is an area comprising several large, sloping craters. The undulating landscape makes it very popular with stunt-cyclists and dare-devil children who refer to the area as ‘The Bomb Holes’. I haven’t been able to ascertain if bomb or grenade practice may have been the cause of this unusual landscape, but one imagines it is entirely possible. Practice trenches are also still in evidence nearby.

The Rugeley camp, alone, housed and trained upwards of 250,000 soldiers during the time it was operational – an almost unimaginably large number of young men. New recruits were sent here to train from all over Great Britain and also from all corners of The Commonwealth. This included regiments from as far afield as Australia, Canada and New Zealand: all these young men shipped thousands of miles from home to train in an alien environment before being moved on to fight real battles, on yet more alien shores.

Theories about where the name ‘Tackeroo’ originated from are explored on the Cannock Chase History website. “It is possible,” they suggest “ that the modern place-name ‘tackeroo’ stems from the New-Zealand Maori word takarewa, an intransitive verb meaning ‘to be kept awake’, perhaps in reference to the constant noise which must have been present in this busy army base.” Alternatively, there is another theory, along similar lines: “(‘Tackeroo’)…possibly from the related word tutakarerewa a stative verb meaning ‘to be alert, unsettled, apprehensive’, which again would quite aptly describe the situation in which the young volunteers must have suddenly found themselves.

It seems so tragically ironic that the name of ‘Tackeroo’ could have derived from the polar opposite of the peaceful, natural haven that the site presents as now. It is quite disturbing to imagine that the homesick young men – who were perturbed enough already by the unfamiliar surroundings and noise at Tackeroo – would probably have had no idea of the hellish environment that awaited them on the next stage of their journey. Once fully trained, presumably they were to be shipped, like cannon fodder, to fight (and quite probably die) in the disease-ridden discomfort of trenches of The Somme, or similar.

But what became of the camp after the war was finally over and the buildings no longer had any purpose? Staffordshire Past Track reveals this:

‘Following the war, the camps became akin to ghost towns, the rows of huts stood empty in an unaccustomed quiet, disturbed only by the sighing breeze swinging a loose door or rattling a window…’

An evocative description, but actually the huts were not left there to deteriorate for very long, many of them eventually finding new homes: ‘Gradually, at the request of Lord Lichfield, the huts were sold off and were transported..by horse and cart..’ Post-war, the buildings were moved to other locations to be re-built and re-used for new purposes. A fine example of early recycling.

It would be inconceivable to end this piece without mention of one interesting piece of information that I stumbled across while researching this blog. It would appear that the Hobbit and Lord of the Rings author, and Birmingham resident, JRR Tolkien, himself, trained at Rugeley camp before participating in real trench warfare. 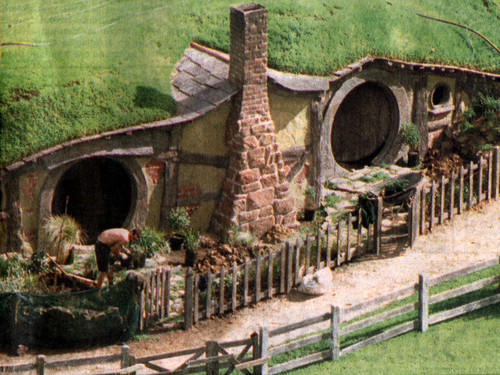 In The J.R.R. Tolkien Companion & Guide: Chronology by Christina Scull and Wayne G Hammond, we are informed that ‘ 19th October 1915: the 13th Battalion moved to the Rugeley Camp …and yet Tolkien was evidently at Rugeley Camp at a slightly earlier date. It may be that he was in an advance party..’ I know that his home of Sarehole Mill was the inspiration for his wonderful landscape creations, but as the Tackeroo landscape currently stands, one could easily imagine it now providing a perfect setting in which a hobbit would feel at home.

6 Responses to WW1 History at Cannock Chase: Tackeroo – The Sound of Silence